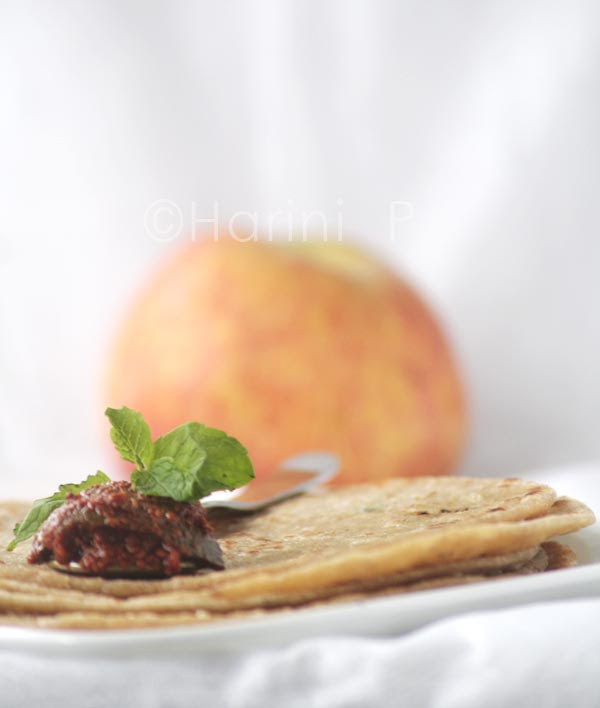 Gobi ke parathe with mango pickle and an apple

Every day we indulge in this exercise called 'search my glasses' (chudamani, chudamani, yenga irrukku, kandupidi!) that seem to mysteriously disappear the moment they are off my nose. Aarya finds it most interesting and insists on playing it all the time even when they are on my person! How does one deny a game of 'search my specs' to a chubby, cherubic five year old? I succumb!

Some time back, having given up hope of finding them (they were waylaid) I carried on with my routine. They were eventually sighted when I hung up the clothes in the machine. Somehow they had found their way to be washed and were full of scratches, had to be given for changing the lenses which predictably did not happen as I had a spare set of glasses for such occasions.

Last week as I was getting ready for the night, I removed my spare set of glasses and placed them on the bed, applied a bit of the newly bought under-eye cream(blogging gifts) when my daughter came in telling me about her day (her days are very eventful - she is young:D) which started off with 'oh-oh' and I knew what would follow!

'My specs?' A nod and almost the end of the world. I have only one spare set.

I am astigmatic, if there is such a term yet. I neither suffer from asthma not am I pragmatic(as you must have seen from above), just that I have a small vision error which leads to severe headache if I do not have my glasses on. I have been dealing with it the past five days before I finally got back both my glasses with new lenses. Now I realize how many scratches my earlier ones had developed in just a year. I have had a really eventful journey when it comes to 'how I broke my glasses' during my lifetime. More about that in later posts.

The break was good. I would come back and live normally, eat and sleep like the rest of the people I know instead of craning my neck and admiring pictures and posts and blogging or facebooking. Yes! That was a much needed break:D!

There was no escape from the kitchen unfortunately. I had to cook to feed, live and enjoy good health. My breakfast a few mornings ago was 'gobi ke parathe' which translates into 'stuffed cauliflower flatbreads' and an apple. I love apples. I love gobi parathas better so I ate them and cut the apples and forced my kids to have them saying they were good for health and that they build immunity, after they finished the parathas of course! I am a good mom:D.

Take the flour in a bowl and add salt Make a well in the center and pour a little water and oil (if needed - I never use oil for roti or paratha dough). Mix well and knead into a soft dough using water as required. The dough should not be sticky or hard. You should be able to make a dent in it without applying much pressure and yet the dough should not spread out when you do so - I guess thats the best way I can describe the consistency! Leave it for about 15 minutes to let the dough relax. Meanwhile prepare the filling.

Heat the oil in a pan. When hot sizzle the carom seeds, add the chillies and ginger followed by cauliflower gratings, salt and garam masala.

Saute till the moisture dries up a little. Takes about 2minutes.

Remove and set aside to bring to room temperature. 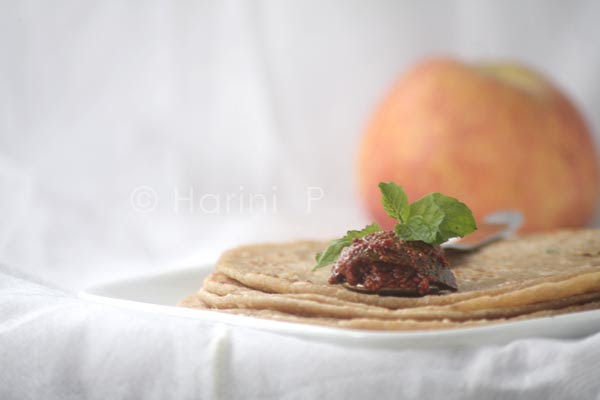 It is the same as any other paratha but I love cauliflower stuffing a lot. See my aloo paratha post for the method to form the parathas.