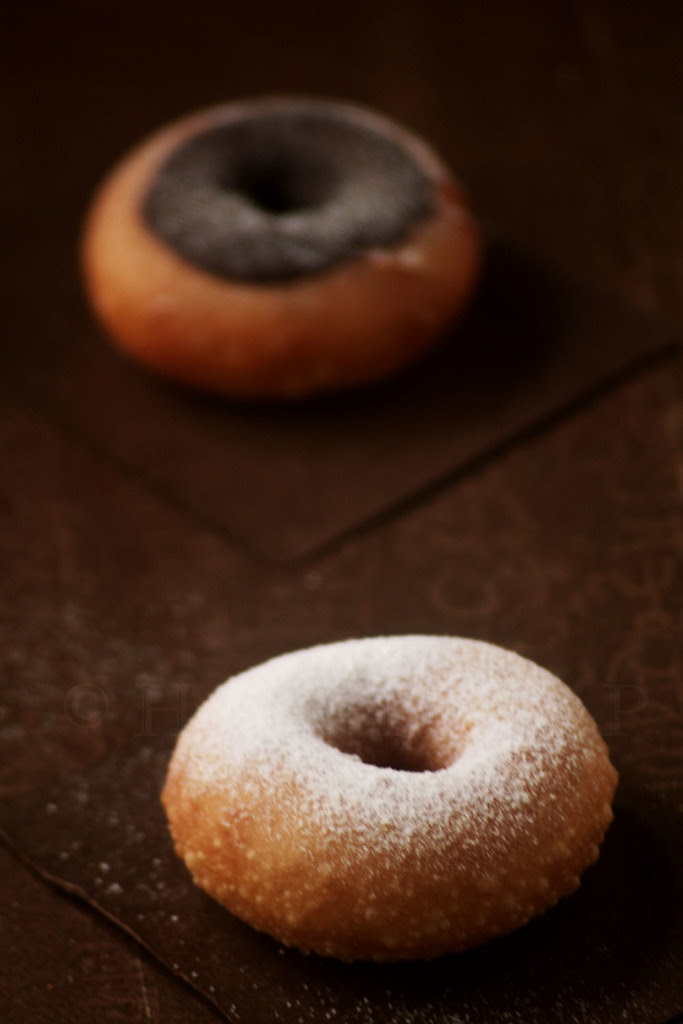 This Summer my sisters introduced me to another (the first being 'Bookworm') treasure trove in Bangalore - Blossoms Book House. The three floor collection of used and new books will drive you crazy. Be sure to carry a couple of sturdy bags to hold your treasures when you leave and walk in only when you have plenty of time, for the variety will keep you glued and I promise that the only reason you will move out will be the pain in the neck you will get because of straining it too much! Phewwww.... wasn't that a really huge sentence all out in a single breath?

It was on the third floor of this lovely haunt that I found a used book on bread baking - Marjie Lambert's 'New Bread Machine Book'. I grabbed it seeing the yummy pictures and sadly after reaching home realized that all the recipes pertained to baking breads using bread machines. Last weekend I must have looked through the pictures for the hundredth time when P reminded me that it was of no use as they were not going to come alive for me. That was enough to pull me out of reverie and drive me to some much needed action. I made some lovely zeppoles adapting it to suit my vegan tastes and they turned out so deliciously crisp on the outside, soft inside and appealing too!

zeppoles or zapplas, it turns out are nothing but Italian versions of fried donuts (small circles of fried dough) that may also come in various fillings. Mine were simply sprinkled with icing sugar and chocolate. They disappeared pretty fast - ZAP! Is this why they are 'zapplas'??

The picture setting has been done by the dear daughter, Jr.H. Did I not say she has a good eye for such things? Jr.P did his part too by dusting the icing sugar and smearing chocolate being pretty generous with the latter! P helped by gobbling the stuff:). K, my lovely, friendly neighbour loved it and her daughter, Aarya (remember those cute hands that cupped my subzi the other day?) actually asked for more that evening! 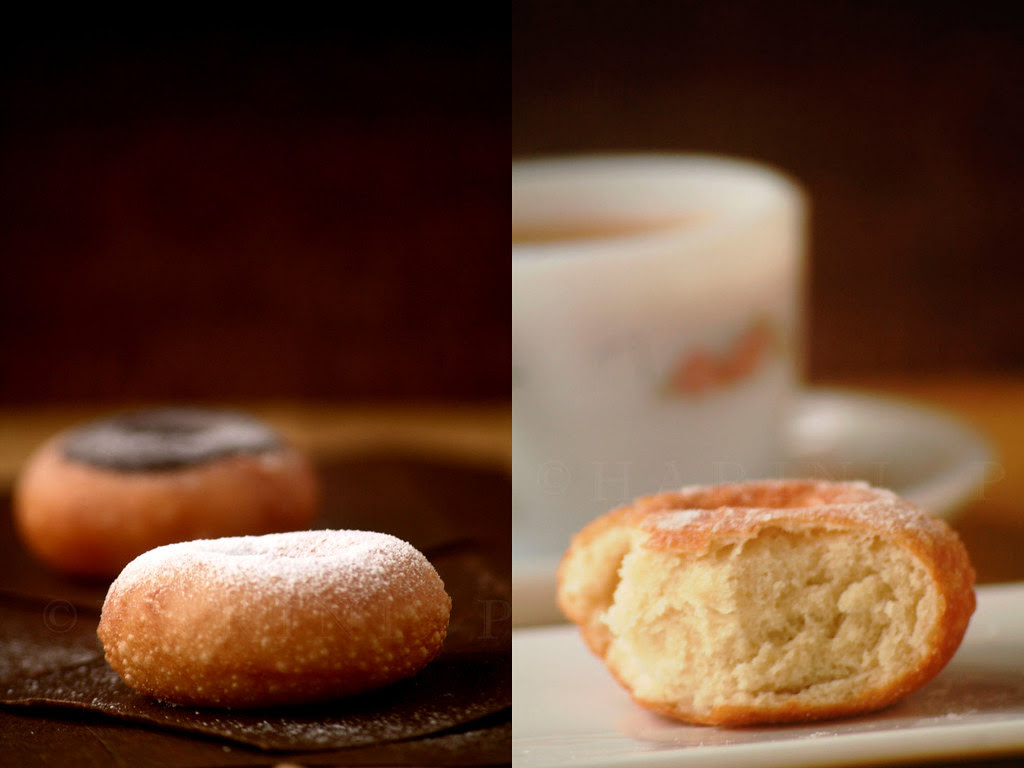 The original recipe makes use of milk and eggs. I have substituted almond nut milk for the milk and used cornflour sauce instead of the egg. Depending on the quality of the all purpose flour used you may have to reduce or increase the quantity of milk in order to get a smooth, soft dough. I required more than what the recipe said. The end result was excellent. This recipe is esp. for my readers who had asked me for bread recipes that do not require the use of an oven. I am afraid that this time I did compromise on the health factor! This recipe has everything I normally wouldn't use - butter, deep-frying and APF.... but then, the rainy season won't last forever so why should one not give in to some tasty cravings? Come, come... indulge:).

Vegetable oil for frying.
Icing sugar for dusting.
Chocolate for topping if desired.

Method:
Dissolve the yeast in warm water and set aside till frothy.

Dissolve 1tsp. cornflour in 1 cup of almond milk. Split one vanilla stick into the milk and heat on low fire stirring constantly to form a thin sauce of the same consistency as lightly beaten egg. Add the butter and sugar and stir to form a homogeneous mixture. Let it come to room temperature.

Meanwhile stir the APF, extra cornflour and salt together in a large bowl. Make a well in the center and pour the frothy yeast mixture and the sauce. Add half cup of the almond milk and bring the ingredients together kneading gently to form a soft, smooth and elastic dough. Add more almond milk if dough is stiff. Turn out on a lightly floured surface and knead well. It should be smooth and soft but spring back easily when poked.

Grease a large bowl and place the dough inside to raise for about 40 minutes.

Turn out the risen dough again on floured work surface and punch out the air gently. Rest for a few minutes. Roll out the dough into a long fat rope and pinch out lime sized balls - about 25-28 approximately. Rest the pieces for a few minutes if they are resist rolling. Roll each piece into a smooth ball, flatten very slightly and pinch a hole in the center with your thumb and index finger. I used a small doughnut mould to make even sized holes and zapplas.

Rest the zeppoles on the greased trays. Cover with oiled clingfilms and rest for 40 minutes till plump. They will not exactly double. Heat oil in a wok or wide saucepan. The oil should ideally measure 180 deg. Cel. I simply heated to moderately hot and kept the temperature constant by reducing the heat and increasing as and when required. 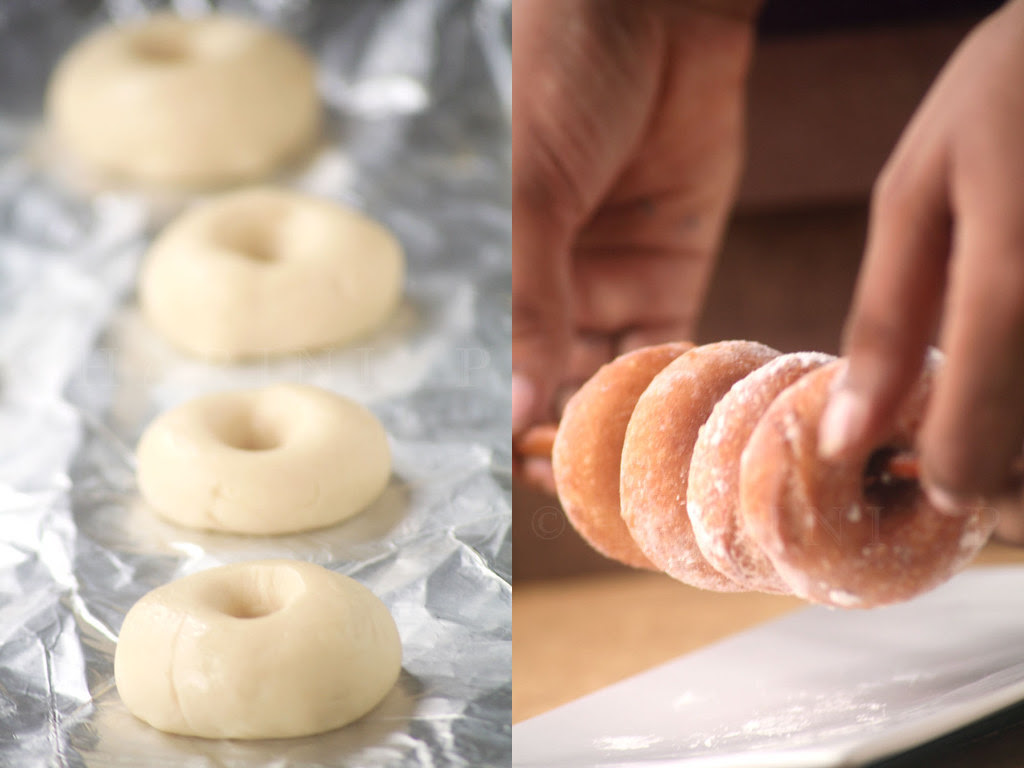 Add one or two zeppoles at a time and cook turning them over for an even golden colour. They will end up with toad skin if added in hot oil so be careful.

You may put icing sugar in a paper bag and shake the zeppoles or just sieve some sugar on top of the fried zeppoles like I did.

My son insisted on melted chocolate as a topping. They taste best when warm and served with tea or coffee. We had them for breakfast and they were quite heavy - probably we all had one too many for they were also very tasty!

These were not very sweet. If you have a sweet tooth and expect them sweet you will have to add another tbsp. of sugar. 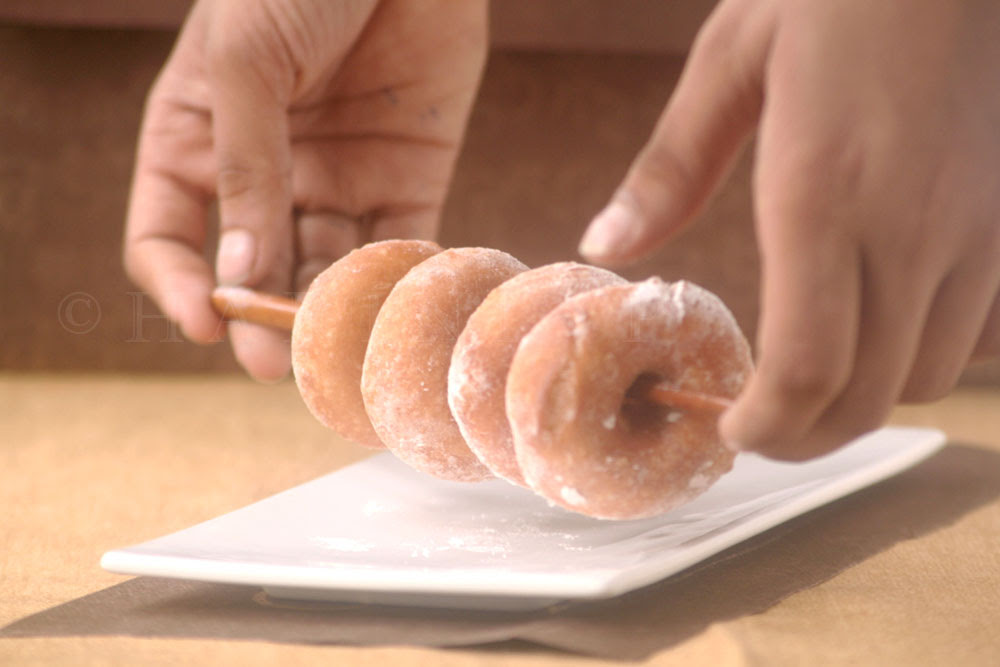 I am sending these to Susan's 'yeastspotting' - a weekly event I like very much but haven't been a part for some time now. I hope this will be the second start!

I am sending these also to Zorra's BBD#22, being hosted by Hefe and Mehr. The theme this month is sweet breads. 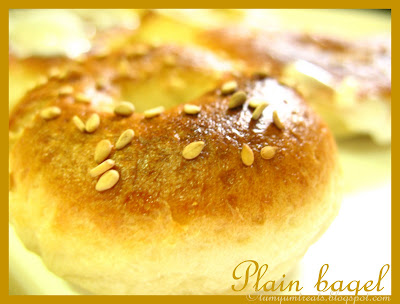 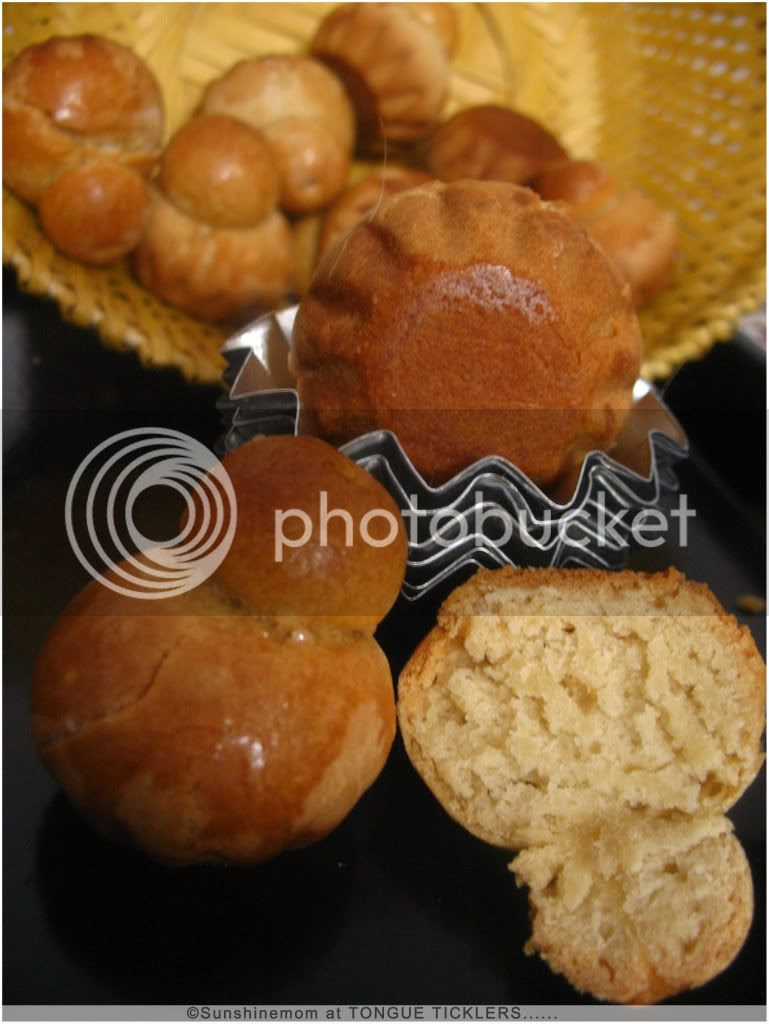 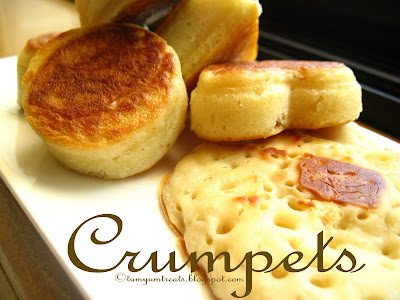 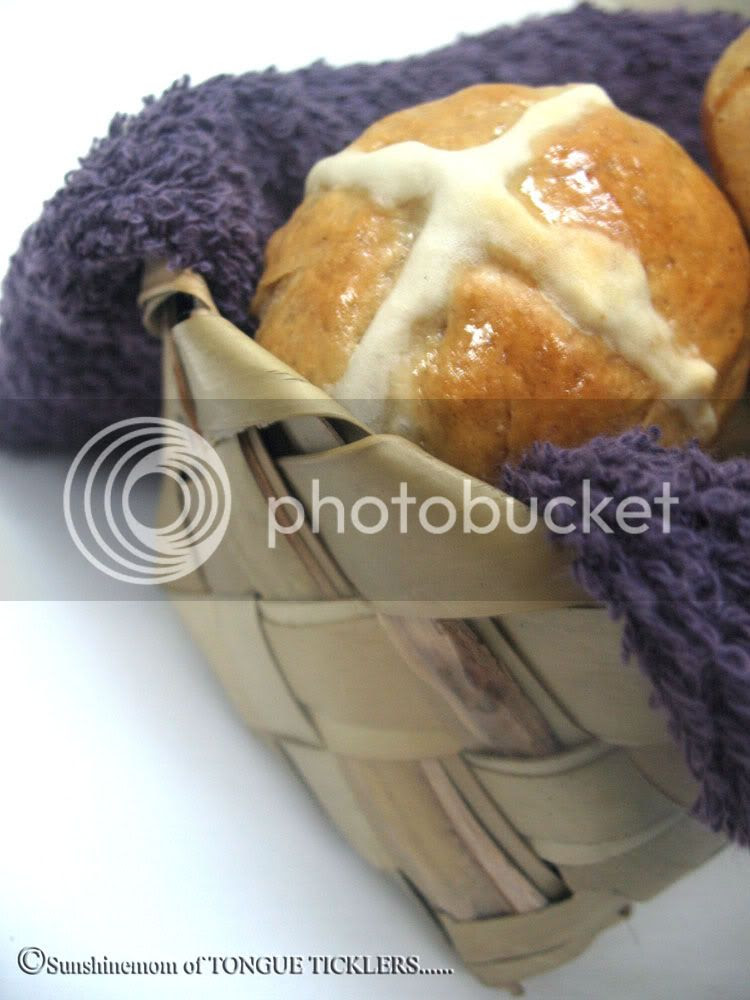 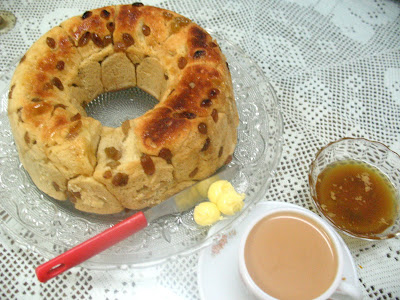 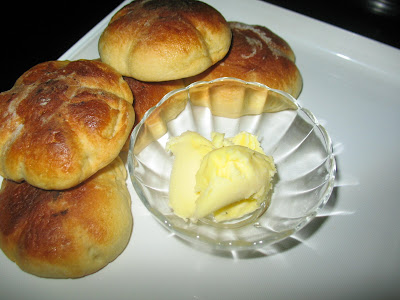 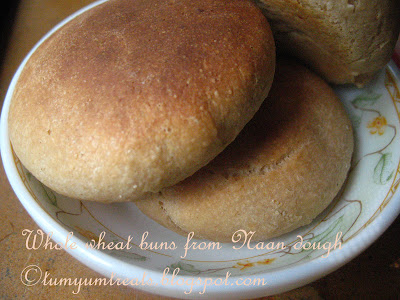 I saw Harry Potter the Sunday that followed the day of release of the 'HP and the Half Blood Prince' and was terribly, terribly disappointed!! 80% of the story was swallowed and too much time wasted on Harry and Ginny getting closer. Some unnecessary additions were made, like the burning of the Burrow which does not take place in the book. Further more, Harry was supposed to be very tall and lanky - Dan Radcliffe was neither! I expected some magic to work when the 'half blood prince' was revealed and there was none! Snape was flat. The guy who did Draco's part fitted perfectly. Umm... I liked Ron Weasely - that part was saved though Mr.Yates could have used some editing in Ron's scenes. Many of the important characters were not even introduced! Poor Neville Longbottom did not feature in most scenes whereas he has quite an important part in the book! I stand corrected. Jr.H read this post today and informed me "Mummy, he has a big part only in Deathly Hallows." (But I still am correct - Even Fleur and Bill were not introduced - I hope I am right!) One scene that was really shot well was the one with Harry and Dumbledore in the cave getting the first horcrux. That was good! Still...., I know I will see the next one with the same fervour when it releases:)