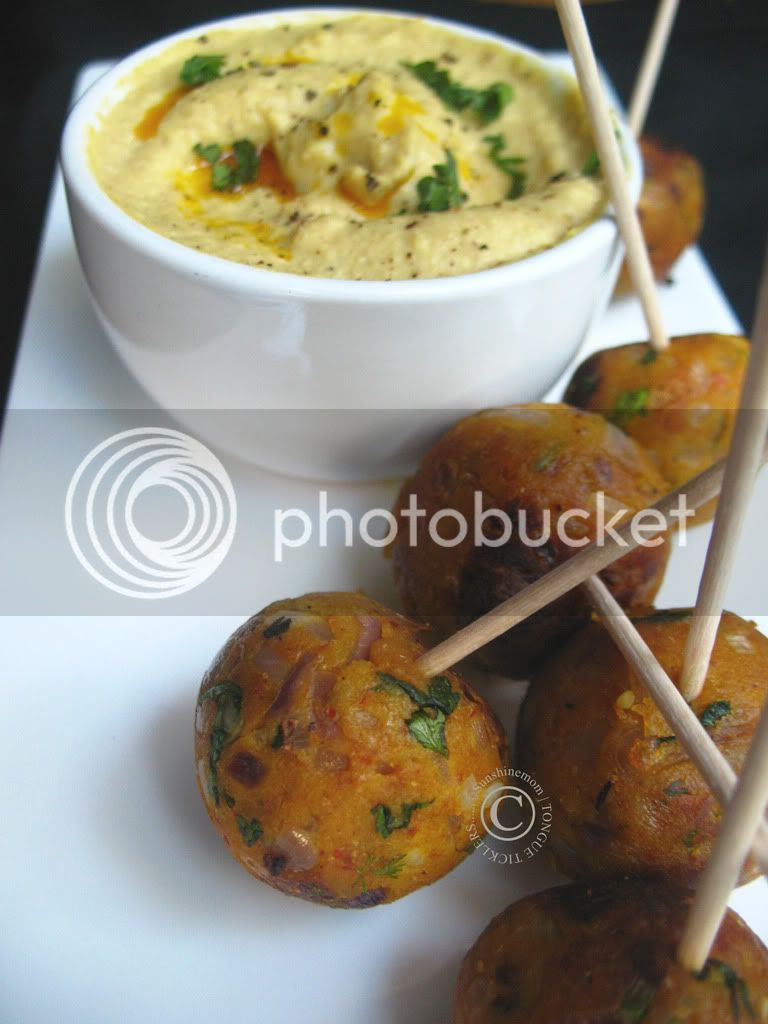 Skip if you are in a hurry - I will take long:
Today's tofu dish is in memory of my first trek with YHAI. I have tried my best to keep this post brief but Kasol/Kasoli is so interesting, I would have done injustice to it without touching upon these aspects that may never find a place in History books - Some of the usual details are available at the link!! Our base camp was at Kasol, a small town that attracts a large number of trekkers/holidayers during the Summers. Kasol is located next to the River Parbati and this area of Himachal Pradesh is famous for many other things besides the picturesque surroundings.

One such place is the Roerich Art Gallery located at Naggar. Nicholas Roerich was a Russian painter, and his son Svetoslav Roerich was the husband of popular yesteryear Bollywood actor Devika Rani. His paintings depict the scenic beauty of the Himalayas, and also the mythical stories that surround the mighty Himalayas. The vast estate has been converted into a peaceful and 'must visit' museum. We took at least three to four hours to cover this place - I had an architect and an artist for company, so that was expected!! The adventure that followed when we missed the last bus to Kasol and got stranded with hardly any dough is another fun story that I will not trouble you with here - I grin ear to ear even as I type:D!

A few hours trek leads to 'Malana' where you find an isolated tribe of dirty people (they do not have bath for days together and the area smells like hell!!!!) living in a self-sufficient manner. This tribe calls itself the direct descendants of Alexander when he had invaded India. The typical Grecian features is unmistakable - they have their own parliamentary and judiciary system, they do not obey the law of the land, and also have their own language - at least this is what we were given to understand. In fact they are so isolated that they would not accept money from us directly, and if you touch their temples even by mistake you are let off only after paying a hefty fine!! If you would like to buy something in this area you place your money on the counter and the Malana guy picks it up but never accepts it from your hand. I am told that the Government is preserving the sanctity of the tribe for their uniqueness, but I found it pretty ridiculous!! Do we bear such insulting behaviour in the name of cultural sanctity?

Besides this Kasol is famous for the high number of Israeli population, and the unchecked cultivation of hashish(Cannabis). Since Himachal Pradesh does not allow buying of land by anyone other than a Himachali there is a strange practice that takes place. Though not recorded on paper we got to know from the locals that Israelis get married to girls from Himachal offering them some money (the deal is cheap as the mass population is poor, rural or uneducated) , and stay together as an arrangement so that land can be bought for cultivation of hashish. In fact we were advised never to talk to Israelis there or enter any of the Israeli restaurants and dhabas that dot the whole of the hills. Here are some pictures I took from here to illustrate my point. The pictures above and below are taken from this site. They are not mine!! I was scared to take a picture too:(! Maybe next time I will:) Do check up the site for yourselves!! Isn't it surprising that no steps are being taken by the Government to kill the drug culture though it is widely known to all?

It was here that I learnt of falafel and hummus! My friend K is an avid and extremely humble mountaineer who knows Kasol well due to her years of visits here for various expeditions, and I must thank her for introducing me to these and more in Kasol, Kullu and Manali!! I knew I would make them at home when I saw the posts on Israeli dhabas there, simply because one has a melodious name(falafel), and the other sounds like dirt(hummus) !!

Sometime later when I returned and had gone to a cousin's place, we were served falafel. My cousin happens to love Lebanese food having been a regular visitor to the Middle East and introduced me to falafel and spoke of hummus too. Now, whether this dish really belongs to Lebanon or Israel is a matter of legal dispute with Lebanon claiming 'food copyright' over delicacies like falafel, tabouleh and hummus! See, the food copyright doesn't start or end in books and blogs - it has surpassed and reached National levels!!

You guessed what I made today? -Tofu croquettes and Hummus.

The book said it was falafel but I just could not accept that - how can tofu ever replace the flavor of garbanzo beans? Did I not say I am going loony cooking tofu? Well, here is the proof! The tofu book is the favored one this month and right now as I am going 'tac, tac, tac' there is a batch of firm tofu all covered in marinade and ready to be toasted! I will just call them tofu croquettes and hummus - not the manure humus:)

For both the dishes I have followed the book as a guide and not stuck to the recipe throughout as I did not have some of the ingredients in my pantry when the mood hit me!

Method:
Puree chickpeas, scraping the sides once or twice.

Add the rest of the ingredients except the garnish and 1tsp. oil, and blend to form a creamy paste. I added pepper generously as we love it!

Season with salt and serve sprinkling the extra oil and garnishing. 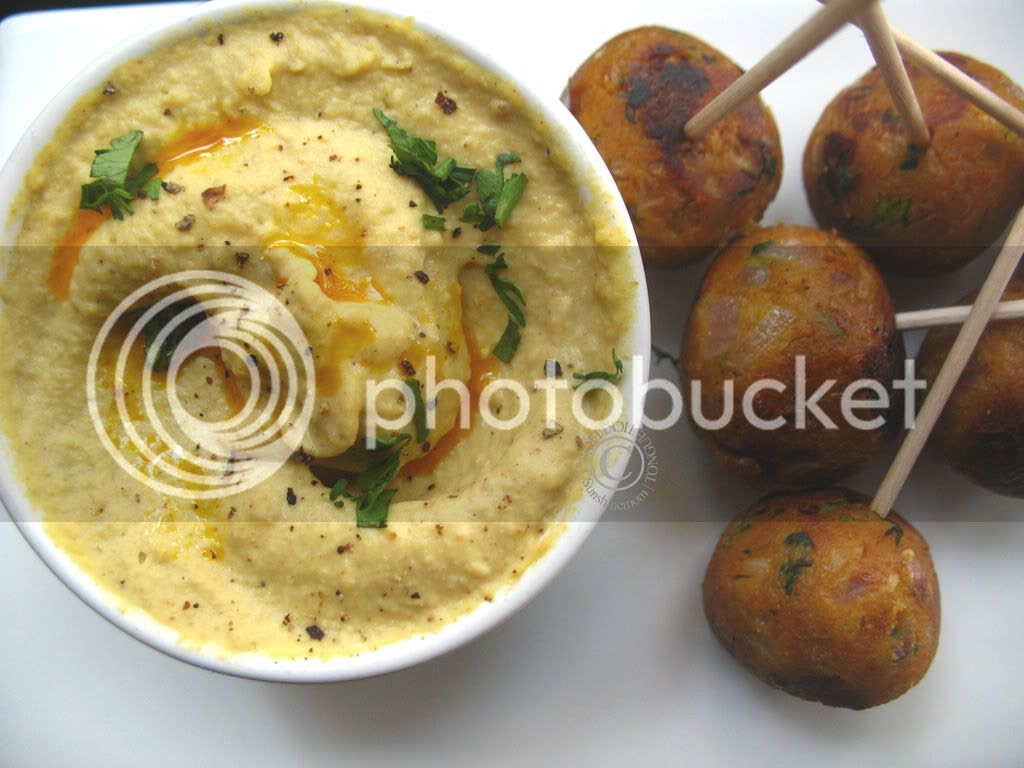 Mix the other ingredients and form a uniform mixture after mixing in the onion garlic mixture.

Oil your palms with the rest of the oil and form balls of desired size. Mine were about an inch in diameter. Bake, grill or broil till crusty on the outside. It will remain soft within.

Mine were taking long, so after 10minutes in the oven at the highest temperature, I removed them. Heated a tsp. of oil in the pan and sauteed till the spheres became crisp. Takes not more than 5 minutes this way.

I made these bite sized and served them pierced with toothpicks with hummus on the side. 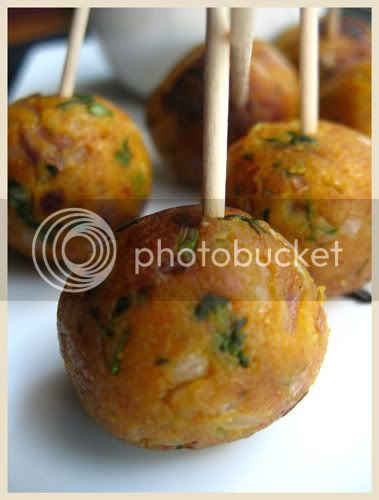 On second thought though these are not falafel I am happier having this with hummus as it balances the gas!! 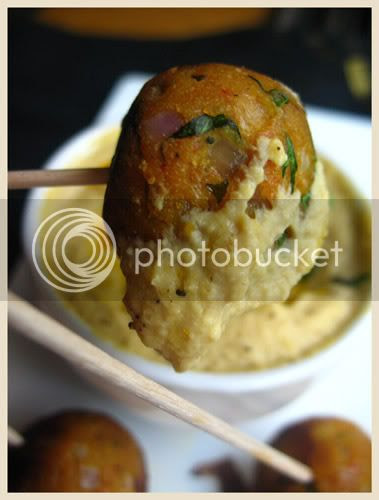 Yummy bites!! But has to be served hot, as the bread inside the croquette goes soft with exposure! 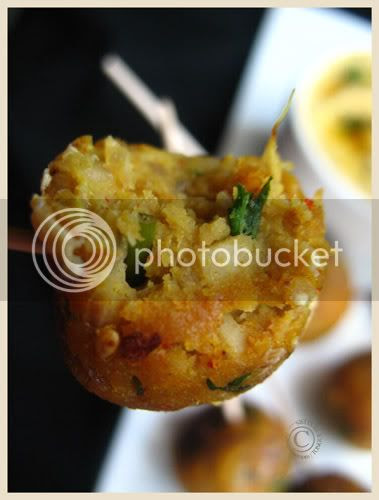 Devika Rani - Known better for her 4 minute long kiss on screen. In those days that was quite a culture shock for Indians! You may remember her for the son - Mein ban ka panchii, ban ke sung sung dolooon re filmed on Ashok Kumar and Devika Rani.

Svetoslav Roerich - Better known as Nicholas Roerich's son, though his paintings of Devika are stunning!

YHAI - Youth Hostels Association of India. It organizes moutain expeditions alongwith stay in tents and food at subsidised rates. Food is great, BTW - the only boring part is the compulsion to stay up for the fireless campfire (which is something I appreciate wholeheartedly!) that is just not possible in the chill there!!

Hummus - A dish and humus - degraded organic matter in soil:) 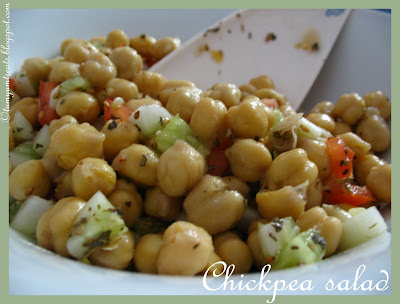 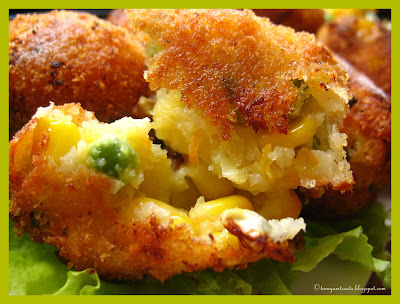 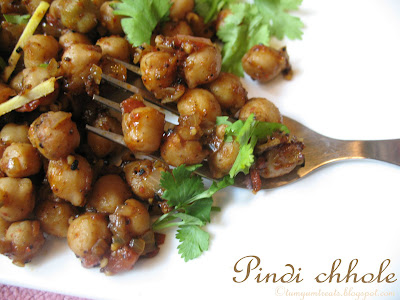 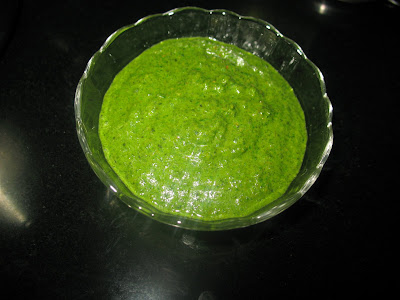