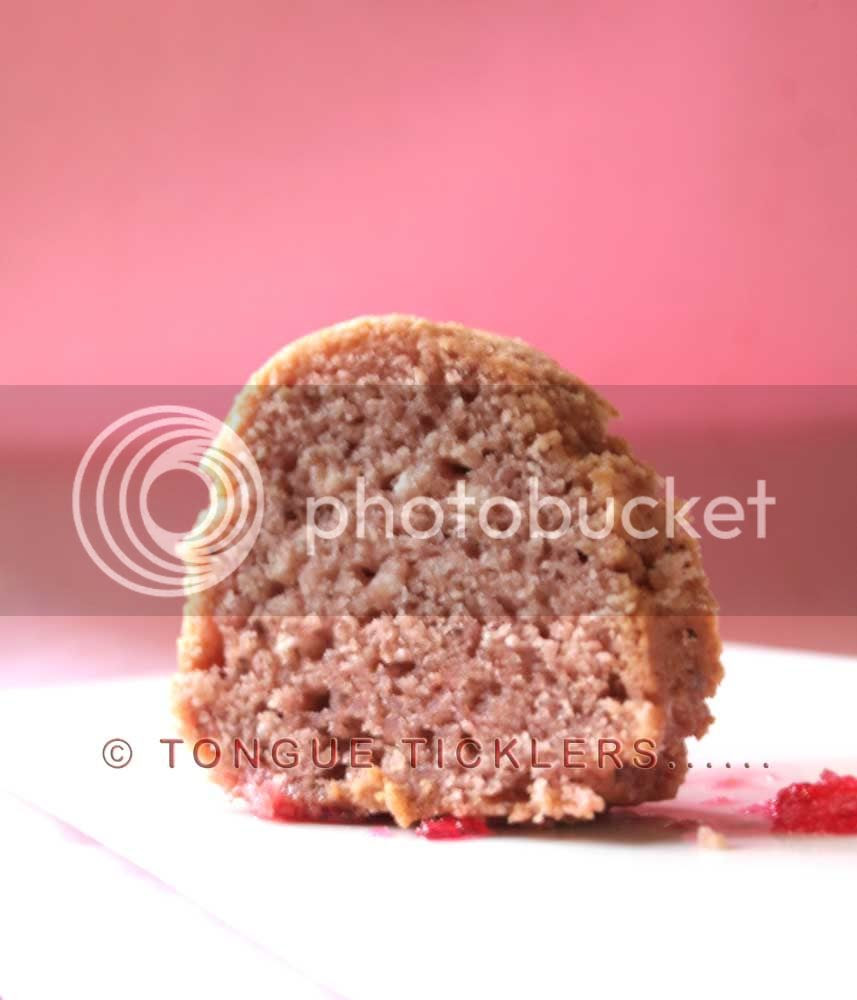 Yippee!! Summer hols are drawing near:)! I am as excited as the children and we are all looking forward to the arrival of my parents and my niece. 26 days to go:) !
A few days back revelation struck me and I know I will forget it soon too - my kids have grown! Jr.H at 13 is a big girl but it is really funny when I hear Jr.P recalling memories saying 'when I was a kid' and he is only 9! When he said that yesterday, the rest of us looked at him with 'was a kid?' expression on our faces which made him go red. It was only after we solemnly promised that we would 'give him our ears' that he went further. Psssss........t, we were actually crumbling inside with bubbles of laughter welling up inside our throats:). On a serious note I am surprised at how vividly he recalled the details of the event that happened when he was four - five Summers ago......

Circa 2004:
We (Jr.P, Jr.H and I) were waiting at the lobby of Sahar Airport (Now known as Chattrapati Shivaji Hawai Adda) for our Bangalore flight. I was engrossed in a book and so was Jr.H while Jr.P was looking through his Noddy book. He was a distinguished little gentleman even then and would get dressed only in jeans/pants and full sleeved shirts and sometimes a coat too:)!

Suddenly Jr.P started nudging me and whispering in excited undertones - "Amma, Shaan is here." Jr.P was and is still a huge fan of Shaan and those days 'Tanha Dil' was a hit number that he loved to listen and sing. I looked up and around but could not spot the singer. The nudging continued till I asked Jr.H for her confirmation which only caused more confusion and curiosity. We knew Jr.P couldn't be so wrong too. On looking around more carefully I saw a guy sitting a some chairs away and he did seem to resemble Shaan. I did not want to appear like a fan(OK! I was just trying to act sophisticated!), so we got up casually and took seats right opposite but a little away to observe him more closely. The guy with a bag and a book was not even bothered by the mini furor he was creating - esp. a mama changing places to have a closer look! Then one gentleman got up, went up to him, introduced and shook his hands and when Shaan looked up and smiled we knew it was definitely him. It was his usual warm smile:).

I would probably not have paid any attention on some other day but I knew Jr.P wanted to go and talk to him - only, like any four year old he was shy about it. So I walked up and introduced myself and told Shaan how Jr.P was a big fan of his and Shaan was actually so sweet! He called Jr.P, asked him his name to which Jr.P predictably looked down and only raised his eyes and Jr.H hid behind me. A proud mama, I asked Jr.P to sing 'Tanha dil' but he wouldn't oblige us and we all had a laugh when Shaan remarked, "maybe it was not his favourite song anymore, haan beta?" I however got an autograph for Jr.P in his Noddy book that Jr.P cherishes and looks at with a lot of pride even now.

Back to the bedroom in 2009:
"He must remember me." "Do you think he does?", he asked his big sister with anxiety.
"Of course, not!", said Jr.H a little snootily.
But Jr.P would not give up hope so easily. "I am sure he remembers! After all not many have my name." He said.
Jr.P has a rather uncommon name but you know what? That conversation affected me most! If we were to see Shaan within the next two years I know I will run up to him and tell, "Hey! we met you a few Summers back, and please do act like you know my son P......, and ask him to sing 'Tanha dil'. Thanks!," and rush back. Maybe he will remember after all!

These talks may seem idle but these little conversations make my weekends something I look forward to with a lot of anticipation. I know that the children will have lots to share - things that have taken place during the week, the brat in school, the new teacher sometimes, and the new friends they have made, which they know I love listening to.

Incidentally we were all having ice creams when this happened and that is another thing that Summers bring back apart from flashbacks and hot air - the need for coolers. I have been trying out a lot of ice creams lately and this time I used the strawberries I bought at Reliance Mart the other day. Yesterday I visited Godrej Nature's basket and found a "do pe ek free" (Pick two and get the third free) offer on strawberries that looked fresh so I picked up some more which resulted in a double treat of strawberry coconut pound cake and strawberry ice cream as well.

The pound cake is inspired from Dorie Greenspan's lemon coconut bundt tea cake but it is veganized and in the end doesn't resemble the original recipe in terms of the ingredients or the taste as the strawberries are bound to add their own taste and flavour, and they turn whackier when you add some balsamic vinegar to it!

I tried the same recipe with orange juice a few weeks back when we were flooded with some tasty oranges and I had really loved the cake. This time I decided to replace the orange juice with strawberry puree and we loved it. The kids did not like it at all because the cake had a 'cocktail flavor'. Do you like wine, bacardi breezer - cranberry flavour? Then you will love this. I am not much into drinks or alconol but I like an occassional tequila, Bailey's Irish cream liqueur, a shot of Drambuie and cocktails with bacardi breezers (and I hate vodka/gin)! So if you have a similar taste you will love this as much as I did!

It was not like anything I have tasted before - I loved the firm texture and the slight hint of wine which was the high point for P, Jr.P and me. Definitely a keeper recipe. I used oil and that too very less but you could easily change it with sour cream and butter - I prefer mine like this.

I love baking in bundt pans as the cakes look really pretty and it is also easy to cut and serve. I somehow feel the browning is more even. All these days I thought I had lost my pan after I made the monkey bread long back but while looking for something else I found my tin and since then all my bakes are bundty (that reminds me of Bindi Irwin)!!

Strawberry Coconut Bundt Cake
(This is perfect for tea - P had it with ice cream!)

Sieve together and toss 1/2 cup fresh grated coconut and set aside.

Mix all the wet ingredients except the balsamic vinegar in a saucepan and heat on low flame till the mixture blends together. Remove and add the vinegar and blend.

Now add the wet ingredients to the dry till mixed well by cutting and folding. Stir twice but take care to do that gently, and do not overmix.

Pour it into your prepared tin and bake in a preheated oven at 180 deg. cel. for 30 minutes and increase to 200 and bake further till firm to touch and a clean toothpick comes out clean when inserted. Mine took 50-55 minutes. Rotate the pan half way through during baking.

Why do we do the things we did and why you should take care of those little things:
Do not forget the soda. It is the reaction between the soda and the vinegar (or fruit puree in any other quick bread or cake) which is responsible for the initial rise of the cake. The heat provided helps the action further. Too much soda may leave a bitter taste due to non-reacted soda left over in the batter. Too much stirring will start and end the reaction even before the cake goes into the oven and result in a tough cake. Do not let the batter sit once you have brought the dry and wet ingredients together.

Notes:
This cake has a firm exterior, a soft but not crumbly interior - it will not fall apart if you cut it. If it becomes tough it means that the batter has been stirred too much! 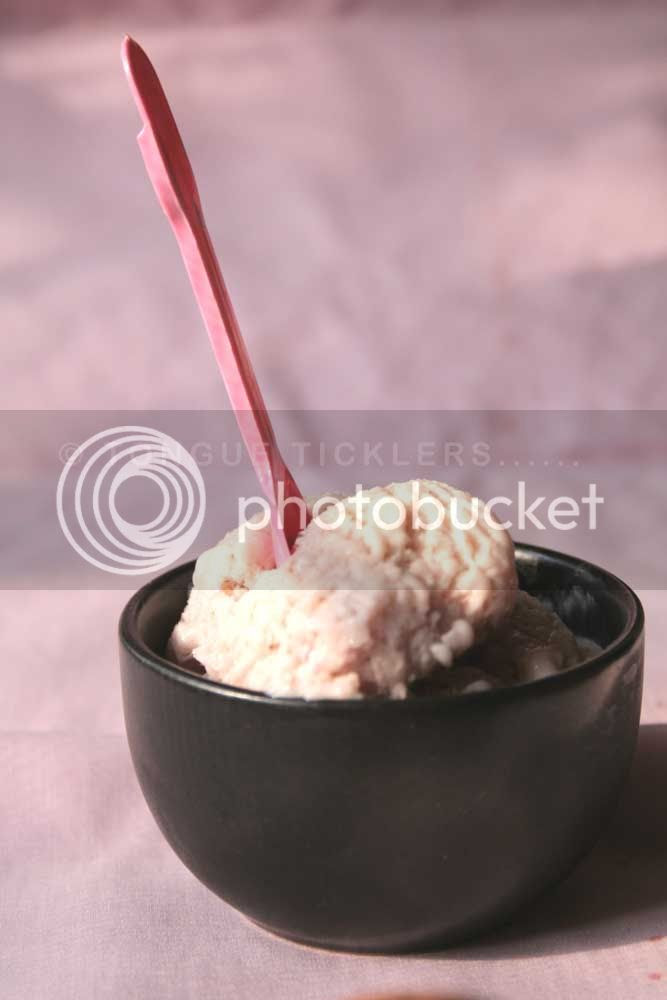 I followed the same recipe as for the mulberry ice cream but this time I pureed the fruits and added to the milk-cornflour-cream mixture. My children had one complaint. They did not like the grainy feeling the seeds gave, otherwise the ice cream was good. Next time I make I will strain the pureed strawberries. I did not think but it obviously makes a difference! I did not add food colouring to get a bright pink shade. I felt that making the syrup and then adding too would have brought out the colour of the fruit. 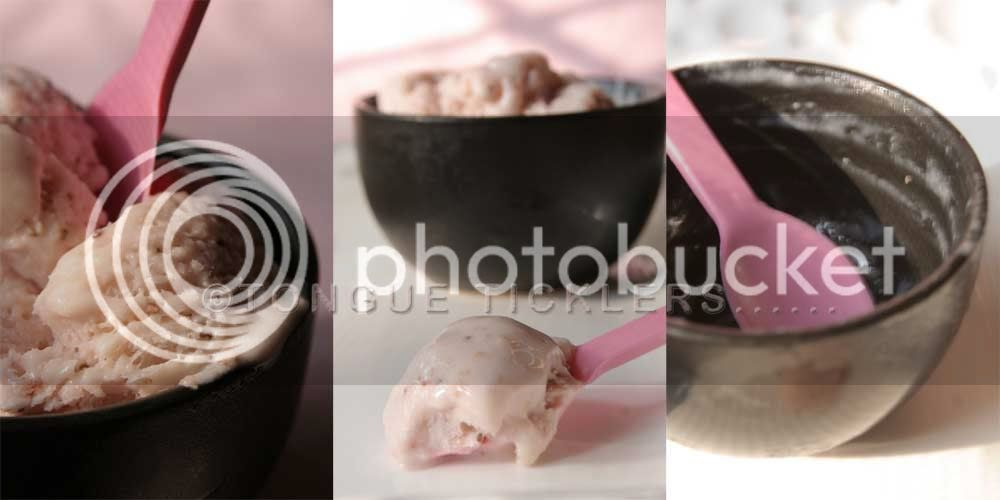 Apologies!!
I know many pictures are not showing up because I exceeded the photobucket limit this month. I don't feel ready for the pro tag yet but these will be set right on 20th. Please bear with a smile:). This was the first time so it is a lesson for me!!

Event submission:
Both the entries go to FIC pink. FIC was started by me, and I am happy to have Priya hosting it this month. Do rush in your entries to her.

I am sending this to Madhuram of Eggless Cooking for her monthly event on various egg substitutions. This time it is vinegar.