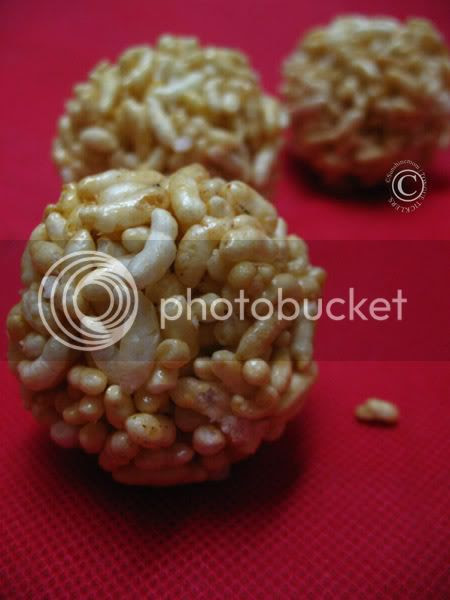 This January our book club initiated by Simran of Bombay Foodie and Bhags of Crazy Curry in June 2008, completed six months. Steadily the number of members has increased from two to eight with at least two of us contributing something inspired and cooked from the chosen book each month! The pick for January was Sweatha's, and she chose the evergreen book loved by all chocoholics from 8 to 115...(now what is the oldest living person's age?) - Charlie and the Chocolate Factory by Roald Dahl.

I am not very fond of Roald Dahl as I find his tales a little too outlandish for my taste (as a kid and as an adult), but there are exceptions to the rule, and at various points after the arrival of my daughter and her passion for Roald Dahl, I have very much enjoyed reading 'The Twits' and 'C&TCF'.

While we are at it I will take this oppurtunity to credit the great mind of Roald Dahl for the whole series of the Clinic All Clear Shampoo Advts. starring Shah Rukh Khan and Saif Ali Khan (One eg. here) using the punchline "Knock, knock! Who's there?". The knock knock series was born as the result of a conversation between the American President and the Chinese President named Hu (Confused by the A.Prez for 'who') in 'The Twits' (As far as I know). I loved the entire series in the book as it gives you quite a few stitches on the sides laughing out loud as well as the Clinic Advt. which used the line brilliantly with two of India's best stand up comedians and versatile actors, known for their spunk as well as the comic timing - only I wish they had credited Dahl for his brilliance!

What I do like about Roald Dahl is his choice of names - I do not know of any other person who could come up with names like 'Willy Wonka', 'Augustus Gloop' save P.G.Wodehouse! P.G.W's genre of humor is (it is difficult to say 'was' for someone who has traversed different generations of readers so seamlessly!) different and completely out of this world - who else could think of names like Gussie Finknottle or Psmith with a 'P', and stick a smile on your face that can make you look like a fool in a public place because you have been just reading a P.G.Wodehouse and howmuchever you wish the smile won't fade out!! Well..., carry on smiling - Roald Dahl proves even me - a die hard Wodehouse fan - that he can have you in splits even while punishing a few mannerless children in 'Charlie and the Chocolate Factory'.

A peep into the story through my eyes: (The unabridged version is perfect for Age 8 and over)
Charlie is a young boy who lives in extremely impoverished condition, and for whom the lack of material luxuries is compensated for in full measure by the warmth of a loving family consisting of his maternal and paternal grandparents, and his parents. The only pleasure Charlie is allowed is one bar of chocolate a year on his birthday - not just any, but the chocolate that is manufactured at the World's leading Chocolate FActory, Willy Wonka's Magical Mysterious Factory! Magical, because no one has been able to replicate the flavors of Wonka's chocolates and mysterious because no one has been working there and yet the factory is operating in full swing! A sudden announcement by Wonka admitting five children to a tour of his factory along with their parents/grandparents prompts Charlie to buy an extra chocolate which results in his getting the fifth golden ticket. Charlie is accompanied by his Grandfather for the tour. During the tour one by one all the other children meet 'ends' that make them turn into better people, but Charlie who is neither rich, pampered nor foolish ends up with Wonka bequeathing his factory to Charlie, and Charlie is ensured a life time supply of the World's choicest chocolate products.

The inspiration followed by half-baked action:
This January we were to get inspired and cook something from the book. I swear the inspiration was in place and I hoped to make 'square chocolates that look round' - don't you doubt that bit unless you would like to go down the rubbish chute like Veruca Salt!! I started off in this creative pursuit with a fusion idea - how about puffed rice laddoos (puffola bars hereinafter) dipped in chocolate ganache and decorated with peppermint eyes on four sides? Sounds great, doesn't it? But you know how it is - by the time I baked the puffola bars and sliced, I had lost patience and my mind came up with excuses like - "Oh! this is healthy", "Why doesn't it slice well?" followed by whack whack and haphazard boulders, and in the end since the kids loved the 'puffola bars', I just let them stay as they were without going into the chocolate ganache thingy:)

Vella Pori is a dish traditionally made by Tamilians during 'Karthigai', a festival which is basically an extension of Diwali. I do not require any reason or occasion for this one as it is a healthy , energy giving, quick 'short break' that does not fail to make my children jump for joy!

Method:
In a wide thick wok put the jaggery alongwith water and heat till it reaches soft ball consistency(Imp.).

Add the puffed rice (coconut and roasted gram if using) and mix so that the jaggery evenly coates the grains.

Remove and gather the mixture into balls. Mine are quite big but you may start off with your level of comfort. Cool and store in air tight boxes. This makes a light, healthy and energetic snack.

Alternatively (and this works out easy) you may spread the mixture in a non-stick baking dish and bake in a pre-heated oven for about five to ten minutes at 160 deg. C. Remove, cool completely and slice into bars. Mine split into uneven blocks and some even broke free and separated into coated grains. They taste good anyway - call them urundai as we do, vella pori as some people do, bars or pops......hmm... what's in a name after all? 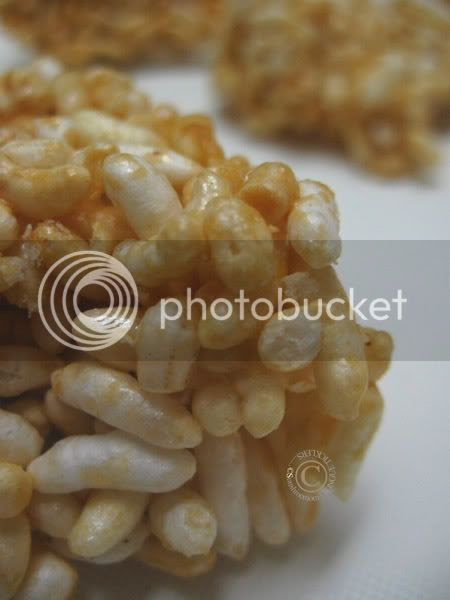 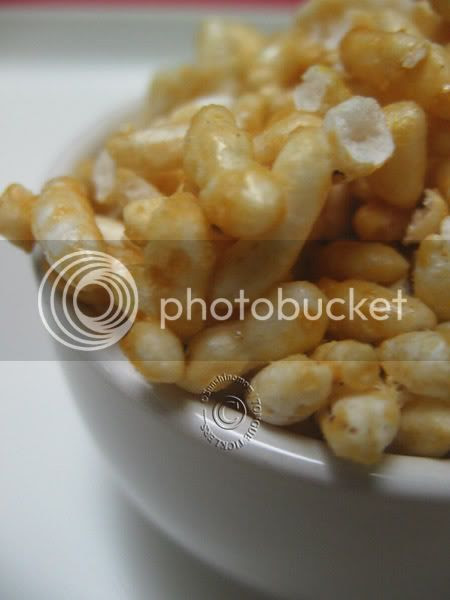 Why bake? - The puffed rice pop up while baking and are rendered crispier then before!

I was supposed to have cubes that were supposed to get coated in chocolate ganache but mood did not permit any thing, and they just remained healthy puffola bars!! I make these in cartloads and they get over in a day or two at the most:)

My friends, Simran and Sweatha both made Chocolate Truffles. Do check up the links for the individual recipes. Simran says "Great minds think alike" - Simran, did you know what I said about that to Sweatha? He he:)