Naan for 'jihva for ingredients - April' 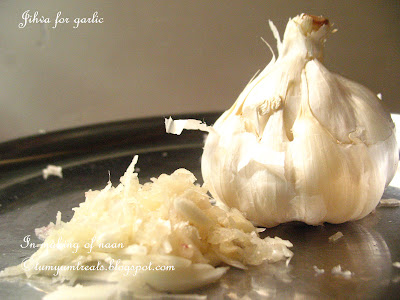 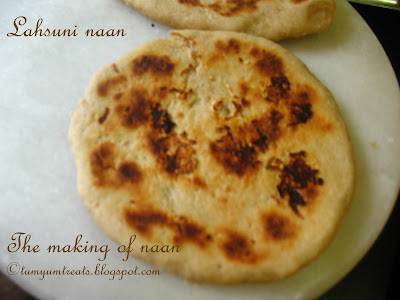 Every Saturday or Sunday, I try and prepare something special (Roughly translated as an elaborate meal). Now that the family has got used to home made whole wheat bread of different shapes, I am expected to come up with something unique each time.

Last weekend I looked up many recipes wondering ‘what next’? While reading Nita Mehta’s 'Mughlai Cooking' it struck me that I never tried ‘naan’ at home. I had always found it intimidating to prepare them at home for the following reasons:
This Saturday I was to conquer that fear and if I failed, then, face it with dignity! Making breads for sometime has given me a certain amount of confidence, and this led me to try making ‘naan’ (I suppose it would have seemed more natural if it was the other way round, but I somehow always end up tackling the tougher things first - It makes the easy stuff easier!!). I have acquired a rough estimate – I hope – of the yeast proportion needed to raise the dough without giving it a heavy yeasty smell, so I decided;
For further help regarding the bakers percentage do visit Susan’s blog ‘Wild yeast’ where she has started with a series of tutorials on the topic! It is of great help for the uninitiated like me who have not seen or learnt cooking/baking in schools or classes!

I learnt the following facts about ‘naan’ from wikipedia –
I made ‘naan’ in the usual way – kneading the whole wheat/white flour mixture using plain yogurt, a little oil, yeast in milk, and salt. Left the dough in a sunny spot to leaven. Punched and made small naans and cooked on an inverted kadhai. I used shreds of garlic to top my naan as I love the taste and smell of toasted garlic. (I do not like garlic very much otherwise).

I had toyed with the idea of preparing 'garlic bread' for JFI started by Indira of Mahanandi. for April's Jihva for ingredients , this time hosted by Virundu.

The naans tasted great. They were more like browned pizza bases or pita breads and I felt good as they had actually cooked through (as in breads) instead of turning hard and chewy with time (That might happen because the naan has not leavened, or due to the use of baking powder? I have to find that out. Your own experience in the matter will help me so please feel free to contribute)!

Since there was yeast in the dough, I also tried making stuffed buns with the excess dough, and they too were equally good. I had made ‘paneer makhani’ to go with it, and the item is a hit with my family. The recipe is entirely mine in the sense that I made it with a rough estimate of what goes into a ‘naan’ keeping its texture in mind. The measurements do not conform to any standard recipe – so if it doesn’t turn out well maybe you could just let me know what was wrong, so I can perfect it or you could give me some tips for bettering it as you might have done by improvising! For me it is a keeper as it is:

1. Heat milk to lukewarm. Add yeast and set aside for 15 minutes or till it is frothy.
Mix the flours, sugar, salt and powdered almonds in a big bowl. 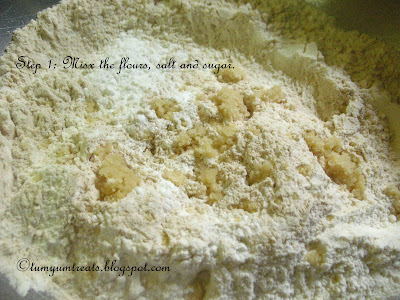 2. Make a well in the centre and add the yeast mixture. 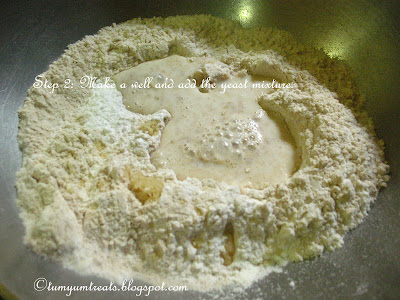 3. Add the yogurt and oil and mix using a wooden spoon incorporating the flour.

4. Knead the dough using a little hot milk or water adding more if needed. It should be a sticky, wet dough (As in focaccia). After the first proofing you will find it manageable, so don’t worry much over the stickiness!

5. If needed smear a little oil (a drop or two) on your palm and gather the dough into a ball.

6. Set aside in a lightly oiled bowl in a warm spot for proofing. It will double in volume in about 45 minutes to one hour. (Here in Thane it is summer already!)

7. Punch the dough, and divide into lime sized balls (I made about 7 small naans, two medium sized, and 3 buns out of the entire dough).

8. Roll it into oblong shaped rotis. Pull a little from one end without tearing the rolled roti. (2mm to 3mm thick – it will double in height while cooking)

9. Smear one side with little water and paste it over hot inverted kadhai. Reduce the fire and cook till one side is done.

10. Carefully remove with a pancake turner when bubbles start building on the surface. Flip and stick the other side.

11. If you would like garlic naan grate garlic on one side and press it down into the dough before smearing the other side with water and sticking it on the kadhai, as I have done in some of mine. 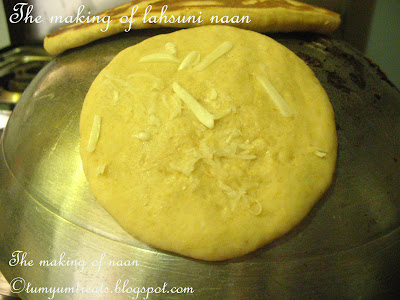 12. Cook on reduced fire. It will double in height (about two minutes for the second side). Remove and check. 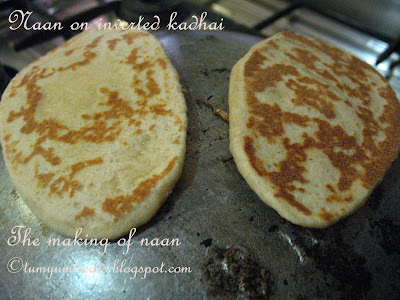 13. If it is speckled with brown spots it is done. The colour of the dough would have also changed. 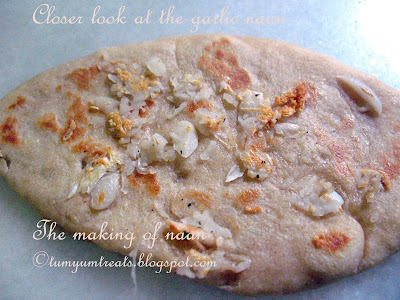 Check:
When you break the naan you will find that it has bread like formation inside.
Serving:
Dab a little butter/ghee and serve immediately with any North Indian accompaniment like chhole, dal makhani, paneer makhani or koftas. For a more authentic taste serve with a few thick rings of onion topped with jeera powder sprinkled with lime juice or with onions in vinegar, and green chillies.And do let me know the outcome!!

NOTE : The kadhai gets cleaned quite easily as there is no oil on the naan - only a thin spread of water, so don't get put off by the burnt look!! 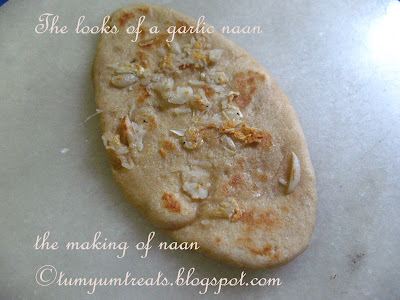 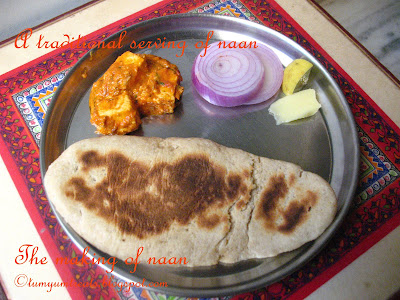 For those who are worried about the calories join my cycling club in Thane!!

P.S: 20.05.08
I am sending all the Rotis/Parathas/Flatbreads I have made so far to the 'roti mela' hosted by Srivalli of 'Cooking 4 all seasons' by announcing a 'roti mela'. Here is the neat and yummy logo created by her especially for the mela. She has got a great blog there with a large variety of items for your palate, so if you haven't (Which I doubt!), do check it now! 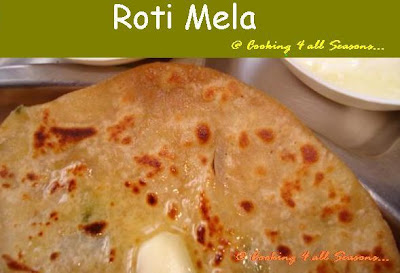