Almond macaroons for my mom with love 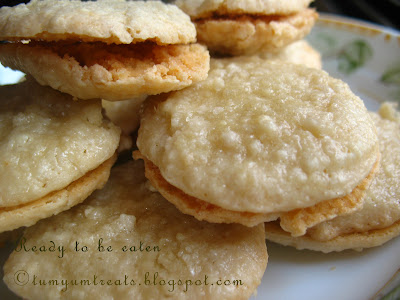 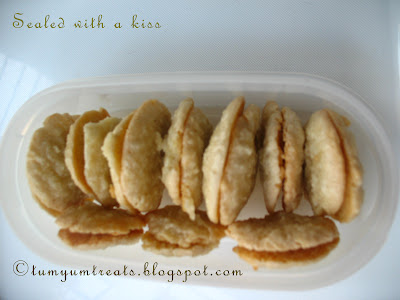 UPDATE on 25.04.08
Hi all,
This post is now out of the JFI event as it contains eggs, and I was not aware that only eggless vegetarian recipes were to be posted. I did not change any part of the post however, as the writing came straight from my heart!

It is 5:32a.m. - 21.04.08:
My children leave for Bangalore today by flight - packed off to my parent's house where their cousins, my sisters' kids await them eagerly. The excitement in B'lore is high this year as we have a new addition - my sister's baby boy who arrived in Jan., '08, and my children will be seeing him for the very first time. I was to make another batch of rich moist almost vegan cakes for the cousins to enjoy.

Things however took a 'precedented' turn as usual - the reason was the announcement of JFI for April 2008, this time hosted by Pratibha and Jigyasa of Pritya.

Who are they?
When talent and yearning come together they create something unique as you can see from the beautiful tribute these two ladies Pratibha and Jigyasa have created for their culinary inspiration - Pedatha. I did not know who Pedatha was till I read all about her here. When I read I felt I had known her all along - only in different forms;
and a warm feeling spread through my whole being, as I thought of all these people and so many others whom, I have not named here. Well....what can I say...."and I sing to myself what a wonderful world!" (Do watch Louis Armstrong's version on youtube - I love Judy Garland, Isreal Kamamawiwo, Guns' n roses and Norah Jones equally but the best is the one who started it all!)

I can only thank the duo for that surge of nostalgia! I also visited Raaga of 'The Singing Chef' - saw her post (the night before) and had another burst of nostalgia. Came back with a lump in my throat and decided to go about making something my 'rocking mom' loves very much - cashew macaroons! My mother does not generally prepare 'egg recipes' at home but she does not mind having them either, and she really loved the cashew macaroons I bought from 'Merwans' in Andheri - those who have been there know that there is no other bakery like merwans for cookies and macaroons and cashew cups of course! I did not find the time to go all the way and had quite forgotten to get them until this burst of nostalgia happened! I rolled up my sleeves and decided to try Aran's recipe. She has these beautiful macaroons in her site that just had me drooling - despite the fact that I have given up eggs!

What are macaroons:
Macaroons are.....well....best called meringued cookies. Here is what I gather from Wikipedia:

The version I have made, using powdered almond has its origins in Italy where it is known as "amaretti". The English version 'macaroons' take this name as the colour of almond macaroons is the same as that of macaroni pasta which are known in Italy as "maccherone". The French macaroons have obviously gained more popularity than the rest owing to the butter cream icings in between (These are technically - "gerbets"), I guess. Somebody correct me if I am wrong.

Macaroons are basically made of egg whites beaten to a stiff meringue which are then folded with different binders such as powdered almonds, peanuts (I have used them in my first every macaroons some 5 years back!), cashews, potato starch, coconut (These are the most popular ones in India) etc., and sugar. Since they are unleavened, they are popular in France as a common treat in Passover/Pesakh - a festival of unleavened breads.

While making my own fancy free macaroons, I checked up quite a lot of pages - I had decided to follow Aran, but why not?? I have briefed some here for my future reference, and for your interest:

My own macaroons this time are inspired by Aran's yummy ones at Cannelle et Vanille, though I would prefer not to use the butter cream icing! There are many other perfects, and it would be injustice not to mention Yochana's almond chocolate macaroons , Molly's Coconut macaroons topped with chocolate, and this page with a really rich and creamy variation of the simple macaroon! There were many more but I had closed the tabs before putting up my draft.

I am not posting my recipe for the simple reason that I just followed Aran's....no difference except that I converted them into cups, teaspoons etc.....and I learnt.....that it makes all the difference. My own macaroons turned out a little sticky on the tops, they did rise though not as much as Aran's! I knew the minute I saw them that it was a flop show - here they are! 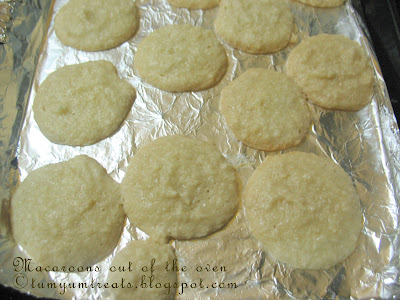 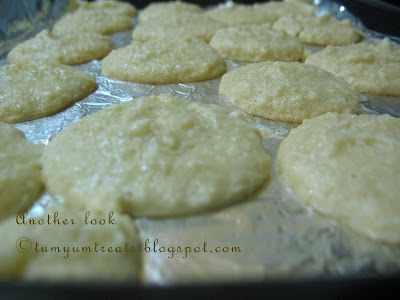 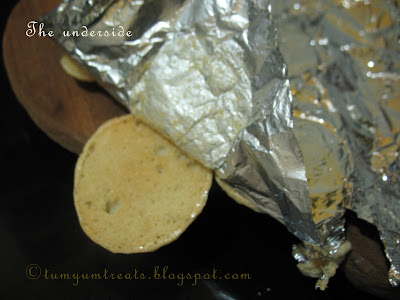 Ha - I know the big question - Why is this lady posting a flopped recipe for JFI with love? Here's why:

My mom's reaction:
When I called my mom later she says - 'The macaroons are very tasty".
I say - "Amma, I know they have come out flat, and sticky."
Mom says - "No, they are tasty, not bad at all."

My daughter's reaction:
Wow Mummy, they are great! Too good.

My husband's reaction:
"These are the best macaroons I have had."

Post script: 24.04.08:
I showed him Aran's macaroons today when he gave me another complement on my wonderful macaroons and said - "No, this is how they ought to be. Have you forgotten those at Merwan's?" He gives them a look and says - "Ah, she must have used moulds, but yours are hand made!" I say - "No". He says - "She's the one who is a pastry chef, isn't she?." "She should be that good. You are better than her - yours have come out perfect the first time."

Now, that is love, and that is what keeps me going!

The guidelines for "JFI- love" is explicit - Write a tribute that you would like to pay to someone in your life, in the form of recipe/s, even a culinary health tip/s. That person could be: Someone who is dear to you; Someone whose cooking you have loved; Someone whose cooking inspires you either to cook, or at least to share the recipes with others.

A small writeup about that person followed by a recipe/s; what that person means to you; any anecdotes, what that interaction meant to your life and growth.

For the first time, confronted like this, I realised how lucky I am - I cannot think of any one person because they are all around me, and to name anyone would be impossible for me....I love them all. Each one of them has cooked/steeped his/her way to my heart (Yes! - a lot of it starts with my stomach!).

Thank U Indira who started JFI and Pratibha and Jigyasa for choosing this beautiful theme - it just gave me an opportunity to unfold my love for the world, to tell my blogger friends - You rock!!

A trivial fact that mummy told me - Tuttukudi (Tuticorin) in India is famous for its macaroons, and mummy says she has written down the recipe as it appeared in a Tamil magazine!

Note - No longer an entry for the event due to reasons stated in the beginning of the post!