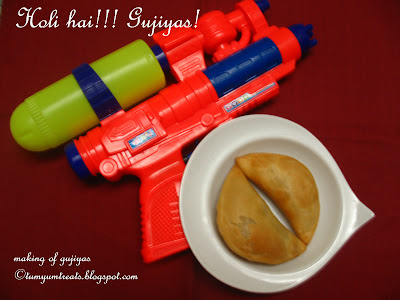 Belated Holi greetings! What I always liked about Holi was Mummy's gujiyas. In the North of India, people celebrate Holi with coloured water, gulal, gale milna (Greetings) and sweets esp. gujiyas. Now of course it has been replaced with dyes and 'don't know what colours'!

A little about what 'Holi' is and why it is celebrated:
Holi is an Indian festival which falls in late February or early March (Phalguni Poornima as per the Indian Calendar). It is a festival symbolic of the triumph of good over evil. People celebrate it by spraying each other with dry colour powders or coloured water (Originally it was played with flowers which is so much better than all this!) and also hug each other (Gale milna)

The background of Holi:
(Just scroll down to 'back to gujiyas' if you wouldn't want to read the story - I rather enjoy Mythology and folk lores, and assumed that there might be others who might feel the same way!!)

Once upon a time the earth was terrorised by the mighty demon called 'Hiranyakashipu'. The demon had overpowered the netherworld, the earth and the deva loka. Frightened by his activities the devas approached the Preserver - Vishnu (The Supreme God), appealing him to end the tyranny of Hiranyakashipu.

By divine intervention by Sage Narada, Hiranyakashipu's son Prince Prahalad turned out to be a devout follower of Lord Vishnu right from birth, much to his father's anxiety! The demon's hate for Vishnu was so much, that he decided to end his son's life. He tried to kill the boy in many ways (By pushing him over a mountain etc.), but the child was always saved by the grace of Lord Vishnu! Eventually Hiranyakashipu's sister 'Holika' (who had acquired a boon from Lord Brahma that she would never be harmed by fire) decided to help her brother get rid of Prahlad. She entered a pyre with the child in her lap, but the God of Fire - Agni consumed her, and the boy remained unharmed.

This is the reason why on the Eve of Holi, people build a big bonfire and pour offerings into it to symbolise the rejoicing at the death of Holika (The evil mind which plotted against the good - Prahalad)! Thus Holi is symbolic of the triumph of good over evil.

In the lore, Hiranyaksha is killed in an unarmed combat with the Lord, and the virtuous Prahalad is crowned King. This is the avatara(Divine form) of Vishnu known as the Narasimha Avatara wherein he assumed the form of a half Lion-half Human to establish peace on Earth!!

Back to Gujiyas!
Gujiya is something like a sweet samosa or an Indian version of stuffed tart/pastry! The cover is made of refined flour made into a cookie dough and the filling is of 'khoa' or 'mawa' mixed with various dry fruits. Khoa itself is a milk product made by heating milk and reducing it till it leaves just some solids. These milk solids are rather tasty and is used in South India as 'theratipal'. (I never forget to buy two or three packets of 'Aavin's' theratipal when I am in Chennai)

I made 'gujiyas' for Holi and forgot to post, as usual!

Here is my method for gujiya: (Yield - 42 gujiyas)

Method for the dough:

1. Mix the milk, water, melted butter and salt heating till the mixture is blended. Cool till warm.

2. Sieve the flour and discard lumps. Add the liquid blend and knead a stiff dough (As for cookies). Set aside for 1/2hr. 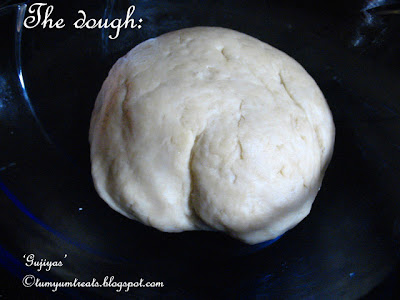 1. Roast the khoa till it is pink and the raw smell evaporates in sim fire. This takes nearly 15 to 20 minutes. I did it in non stick flat pan. Keep stirring constantly. 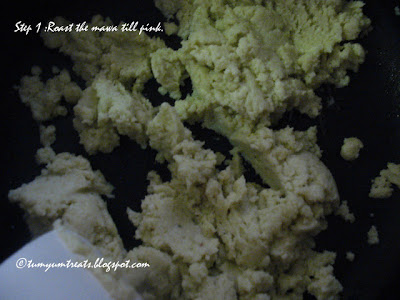 Spreading and gathering till it actually turns a peachy colour otherwise the gujiyas will smell raw and will get spoilt in a day or two!! 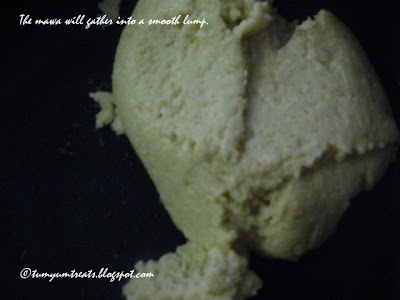 2. Mix all the dry fruits and sugar little by little (Taste and see whether it is sweet enough). My filling is not really sweet as I prefer only a hint of sugar, so please do not go by the sugar I have used. 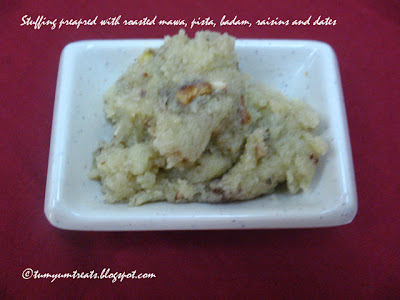 3. Allow the filling to cool completely. Crumble it into a powder with your fingers.

1. Take a lime sized ball of dough and roll it into 5 to 7 cm. discs in diameter. It should be thin as for puri. 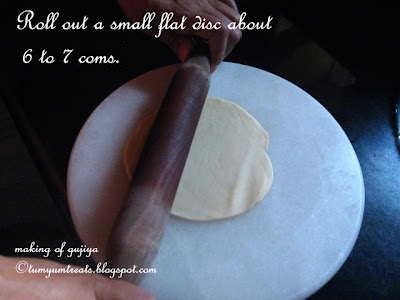 2. Place a tbsp. of filling (As per your level of comfort - more or less is all right) in one half of the circle from the centre. 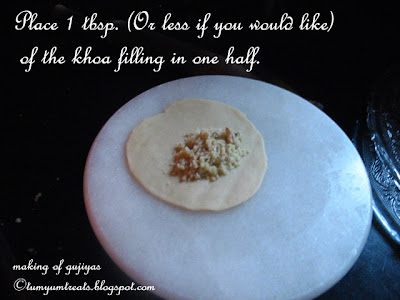 3. Dip a finger in water and smear it on the outer edge of the disc.

4. Cover with the empty half over the filled half and press the edges to seal them. 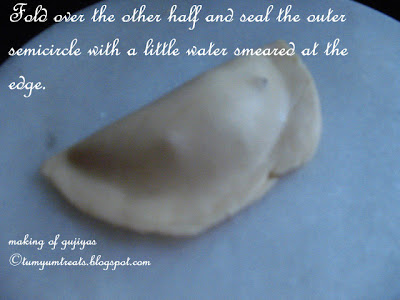 5. Use a pizza cutter or a fluted cutter and trim the outer edge. 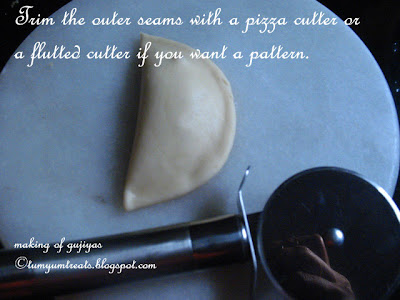 6. Prepare the rest of the gujiyas in a similar manner and keep them all covered by a wet cloth even as you finish making one so that they do not dry out.

7. Option 1: Place six in a prepared baking tray a few centimetres apart from each other.
Bake in a pre-heated oven at 150 deg. Cel. for about 15 to 20 minutes, turning the gujiyas over in between, till they are all browned evenly. 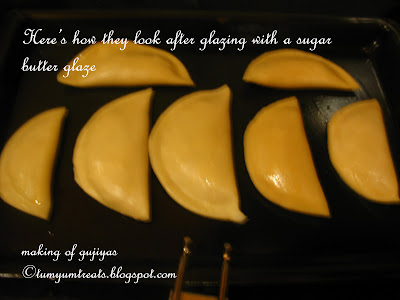 Cool to room temperature and serve or store in an air tight container. They stay well for about three days. Mine got over the next day!! 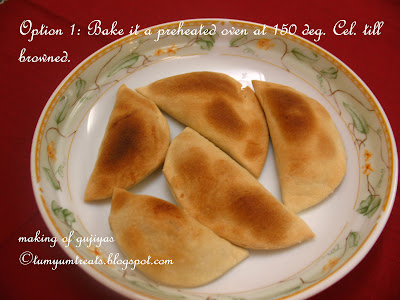 Option 2: Deep fry the gujiyas in fat of your choice (I used sundrop oil), in reduced fire till browned. Cool to room temperature. Serve or store as above. 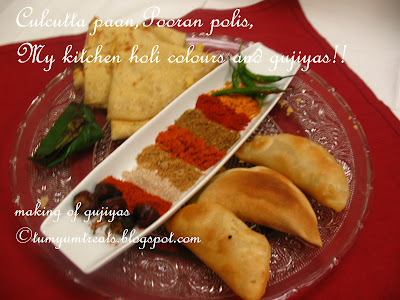