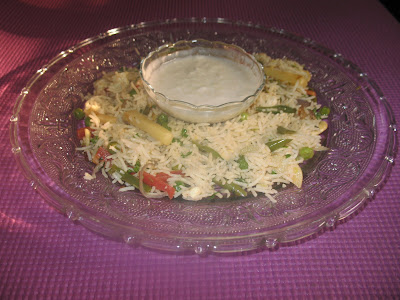 I was leafing the other day through an old food magazine - Cuisine - which is out of publication now, and I found an article titled ' A royal repast - Pure Avadh cuisine' by Anju Munshi [August 1998 issue].
Most of the recipes were given by Jiggs Kalra - It is said in the site that Khushwant Singh had once called him 'Tastemaker to the Nation", he definitely is my tastemaker through this veg biryani recipe!!

His biryani is kathal(Jackfruit) ki biryani and is more spicy, but the spices have been cooked and sieved so that all you get in the vegetable layer is the delicate aroma and not the tongue burning concoction which you generally find in hotels.

I have altered it a bit to suit our taste - I have used mixed vegetables and eliminated kathal. So ideally it should be titled 'Tahiri Biryani'. I have used lesser than the recommended quanity of spices and have not sieved the cooked yogurt and spices as they were almost half the given amount. The one I made was appreciated by all who tasted it! It is worth a try and believe me you will end up making it quite a few times. Do I sound over confident? - That is because I know my recipe source is trustworthy, everyone who ate asked for the recipe, my daughter refused to share it with her friends as she thought it might get over, and because my son who hates all mixed rice varieties loved this one and asked for more!!

Etymology of 'biryani':(Source: Wikipedia)
It originates from the Persian beryā(n) (بریان) which means "fried" or "roasted".

History and the Indian Biryani invasion:
(Source:Indiacurry.com)
"Based on the name, and cooking style (Dum), one can conclude that the dish originated in Persia and/or Arabia. It could have come from Persia via Afghanistan to North India. It could have also been brought by the Arab traders via Arabian sea to Calicut. We know the history little better during 1800 to 1900. During Mogul empire, Lucknow was known as Awadh, giving rise to Awadhi Biryani. In 1856, British deposed Nawab Wajid Ali Shah in Calcutta, giving rise to Calcutta Biryani. Aurangzeb installed Nizam-ul-mulk as the Asfa Jahi ruler of Hyderabad, as well as a 'Nawab of Arcot' to oversee Aaru Kaadu region (Six Forests) south of Hyderabad. These moves gave rise to Hyderabadi Biryani and Arcot Biryani. The Biryani spread to Mysore by Tipu Sultan of Carnatic. Needless to say it was a royal dish for Nawabs and Nizams. They hired vegetarian Hindus as bookkeepers leading to the development of Tahiri Biryani." 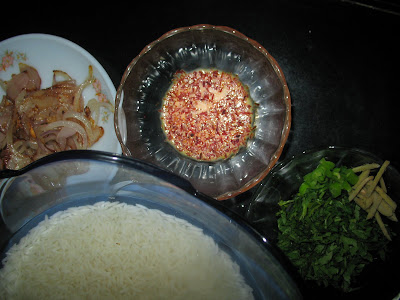 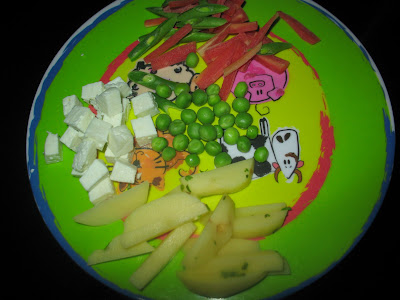 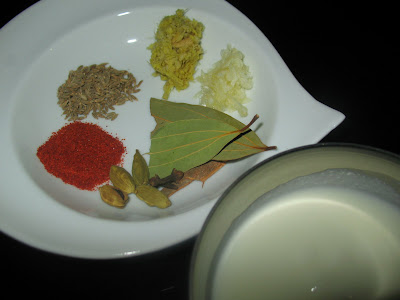 1. Steam the veggies(The paneer is added at the end, do not steam it) with a little salt till just done. I did in the microwave at power steam for 2 minutes. They should retain the crunch. The recipe calls for deep frying but these are equally tasty.

2. Heat oil in a wide and deep wok or kadhai. Reduce heat to medium and add the cardamom, cloves, cinnamon and bay leaves. Stir for a minute till the cinnamon turns a shade darker and then add the ginger and garlic. Saute till the moisture evaportes. Turn off the fire.

4. Stir in the whisked yogurt and return to slow fire. Saute till the liquid evaporates. Add red chilli powder, mint and coriander, salt, paneer and veggies and mix well. Add the stock, lemon juice and simmer till the vegetable do not retain a watery look and are not too dry. (Some stock should be retained). Mix the chopped coriander and adjust the seasoning as per your taste. This is how it will look: 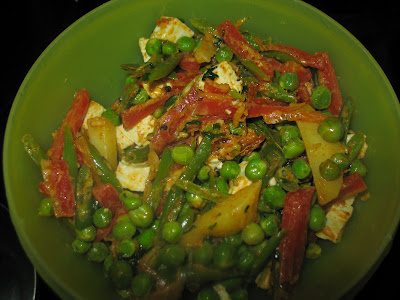 In a pressure cooker, heat a tbsp. of ghee or oil. Add the the jeera, cardamom, cloves and ginger. Saute till the colour of ginger changes. Add the green chillies and fry till it turns a shade lighter. Add rice and fry for two minutes. Add water (Double the amount of rice in cups and less 1/4 cup) and when it comes to a boil, add the salt, ittar (Optional), saffron mixture, finely chopped mint and coriander and lemon juice. Cover and cook till the rice is cooked and grains are separate. In my case, I closed the lid of the cooker and put on the whistle. Cooked on high for 4 minutes and on sim for 7 to 10 minutes and removed from fire. I opened the cooker after well cooled. In this way my rice gets cooked but not mushy and every grain remains separate thanks to the lemon juice.
Fluff lightly with a fork (Not a ladle as it may get mashed). 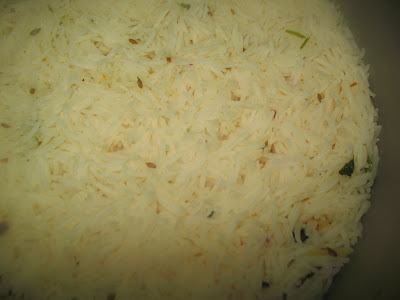 When it is time to serve you have two options:
EITHER
Arrange the rice in a thick layer. Layer the veggies and top again with the remaining rice layer. Seal it with foil or thick atta dough. Pre-heat the oven to 200 deg. Cel. and bake for 10 minutes. Remove and serve directly. In microwave, just arrange the rice and veggies in a casserole. Put the lid on and bake for 3 minutes. Serve immediately. 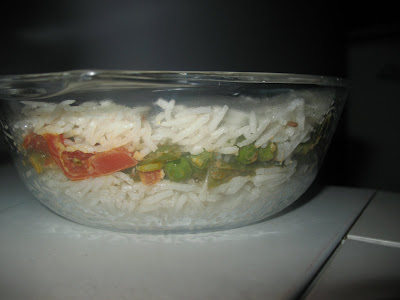 OR
Just mix the vegetables with the rice well and bake for 2-3 minutes in a casserole before serving. The taste will remain the same. I used the second option since the spices get evenly distributed. 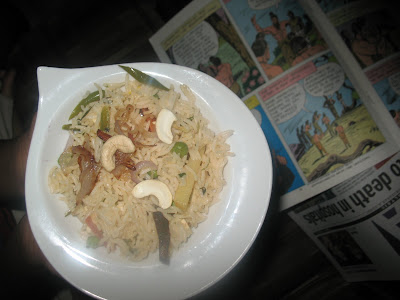 Serving suggestions:
Spread in a plate. Top with slit, fried onions with a bowl of raita (Of your choice) in the center
OR
Directly from the casserole with raita on the side. Mine is cucumber raita.