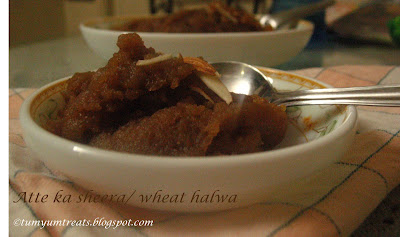 Looking through picasa I found many food pictures taken at various times but not blogged. For sometime the computer was not in working condition, and at other times I face stiff competition from my children. My son claims that I get away with longer hours sitting in front of the comp. just because I am 'mummy'. I gave in to their demands and now on weekends they play for an hour each on the comp.!

This halwa was supposed to go in for the healthy lunch box event, but somehow got lost in the recesses of my albums until now! Better late than never, I thought! And this is such a good, yummy recipe, I just had to share it with all my fellow bloggers here.

I make 'wheat halwa' a.k.a 'atte ka sheera' on the days I make ghee at home. Mainly because I do not like the idea of all that ghee stuck to the wok, going waste! Also because I love the burnt milk solids which settle at the bottom of the kadhai after ghee is strained. My mom used to roast atta till browned and mix it with sugar, after the ghee was removed and we used to fight over the tasty wheat powder!

I have taken to making this halwa which Pratibha, a friend of mine and one of my colleagues in Churchgate (A wonderful cook!) used to bring once in a while to office. I fell in love with it! Mine has a little less sugar than hers (I like sugar n spice to lightly flirt with my tastebuds!, not in the face thing!) but it is equally nice! Its a common sheera, so I am sure many of you might have your own perfected recipes.

This one is for those who haven't made it yet! [I assume that my kids will grow up and look into my blog for their recipes, and I am planning to leave a wide variety here for them!! Maa ke haath ka khaana agar khaana ho to?]

Before I go further, a few known facts and not so well known facts (Just reminding !) about wheat - I got most of these facts from WHfoods. Click to visit and read more......
These were only a few of the benefits mentioned in the site.
Here comes a healthy and delicious wholesome short break diet, which is also one of the common 'Gurudware ka prasad' from me to you! 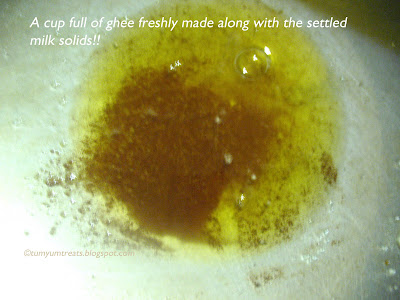 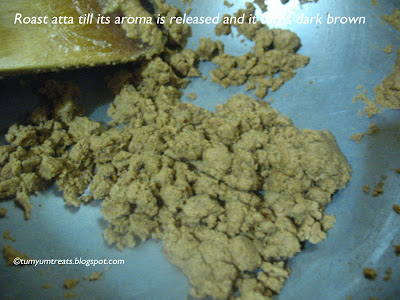 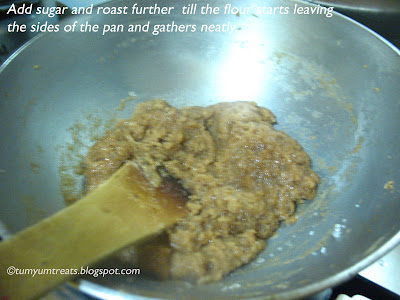 I make it as a 'prasadam' or offering during one of the nine days of 'Navratri' also. It has a nice rich taste, and is better eaten in small helpings as it tends to feel heavy!!